BBQ, Bacon and Beer in Raleigh 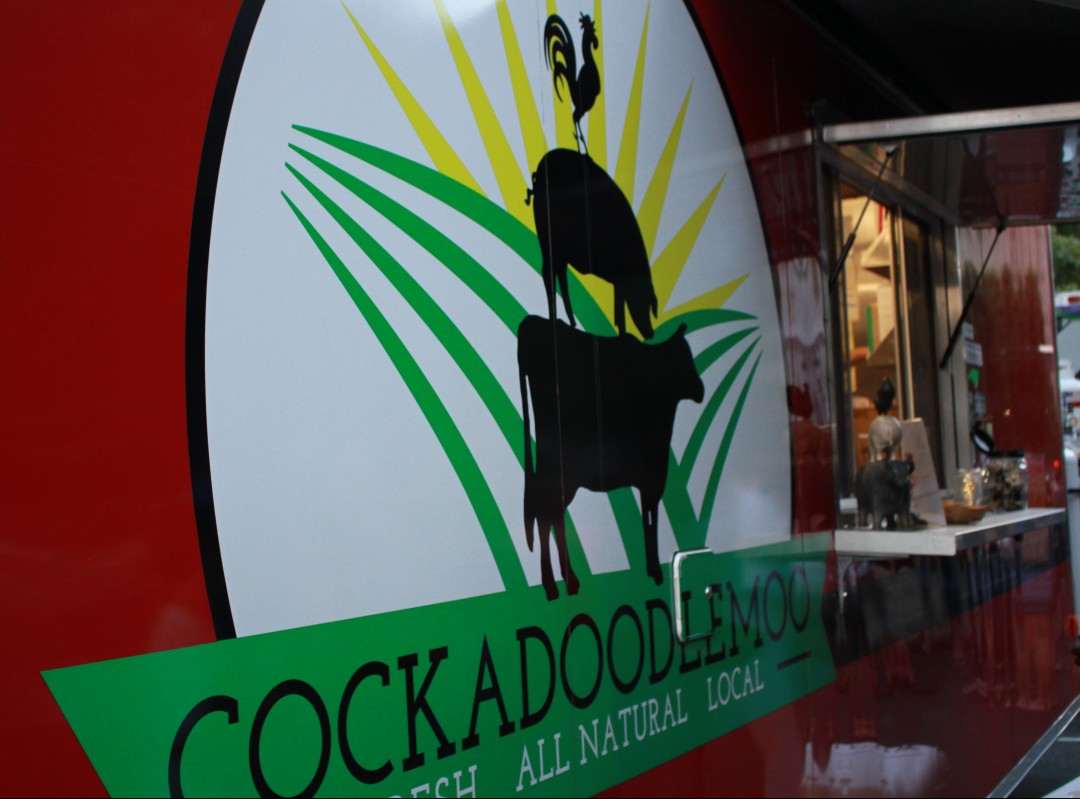 Where? Raleigh, North Carolina. No, me neither.

Until my friend moved there, I’d never heard of Raleigh, let alone committed it to the bucket list – probably most of you haven’t, right?  But I’m going to tell you why you should go there. In food terms…

This place was recommended to me as the best BBQ restaurant around, by a NC resident before I left the UK. Chopped BBQ is the speciality of the east of North Carolina. Vinegary BBQ sauce on pork – quite different to anything I’ve tried before. We settled on the Big Boy combo between the three of us – a rack of ribs, chicken, chopped BBQ, brisket and two sides. There was a great selection of craft beers and bourbons, plus a local NC spirit menu featuring regional vodkas, barrel rested gins and the like. Oh and if you can’t get enough (like you can have enough BBQ food!), you can find their food truck at special events. 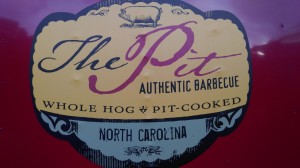 If you’re after one of the best Old Fashioned cocktails around, try here. The bar staff are super knowledgeable and know how to mix a mean cocktail. They don’t serve food so they have to trade as a members bar – which you can join for $1.

Right next to my friend’s apartment complex, this became somewhat of a haunt during our week stay. The waitresses even called us “sweetie”. Ok, so that was also on our first visit, because they’re super nice. Bloody Marys became my staple here, quickly soaked up by warm biscuit smothered in apple butter followed by something egg and bacon based. When I say biscuit I mean a surprisingly good stodgy scone. When I say apple butter I mean apple jam. But potato potahto. 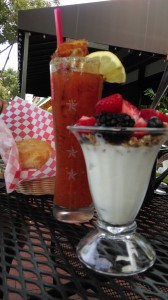 Oh my. Those who’ve followed my ramblings may have noticed that I have a slight fascination with bacon products – particularly how those crazy Americans make every product under the sun with a bacon theme (bacon toothpaste, anyone?). So this place came highly recommended because of its fried bacon. What’s so different about that? Well this is only bloody deep-fried in buttermilk, with the end result resembling more of a giant southern fried chicken strip than bacon. The burgers are ace, though. Check out the turkey, brie and apple slice burger – delish. (That long brown thing on the right? Bacon…) 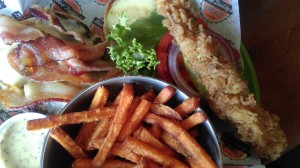 Endless Summer IPA, Jas Watt Scottish, the Bruno Bitter and Autumn Amber Ale – just a few of the ales we sampled in an evening. Friendly bar staff and punters – here we met one of the most amazing Raleigh residents, who we spent the evening with talking about British comedy, vintage clothing, beer and BBQ food.

After meeting Mr resident above and revealing my bacon fascination, we were urged to head here to try the candied bacon. What a treat – a pint glass full of stiff, sticky, streaky bacon that tasted just like piggy lolly pops. Yum. We found it also was great for beer – I’d definitely recommend the Sweet Baby Jesus dark ale. Oh and if you love wings, they do a regular wing challenge, so get your name up on that board! 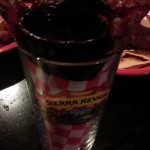 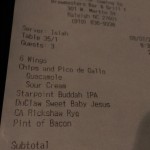 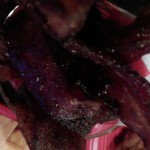 After all that night-time food and drink, you’d think we’d settle for a nice bit of light cereal, yeah? Nope. Not when there are so many beautiful breakfast joints around. Joule is one of the best – try “The Hangover”; southern grits with melted cheese, bacon bits, sour cream, salsa and spring onions. This was also the best place so far for proper barista coffee.

We visited Videri Chocolate on Second Saturday – a monthly celebration of local food. This meant that they’d made some special limited edition chocolates and were part of a trail of places to visit that day. This month’s speciality was fig, white chocolate and goat’s cheese ganache – to die for! 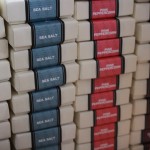 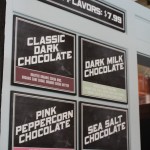 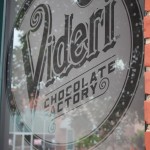 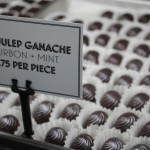 This place has a HUGE selection of world and US beers to take home. You could literally spend hours in here perusing the beers on offer. They also have some cool mixologist-style additions such as quirky bitters sourced from another producer across the street. And yes, there is a creepy guy looking through the window. 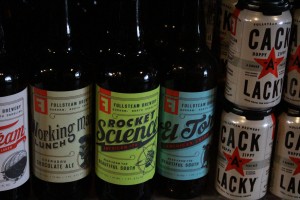 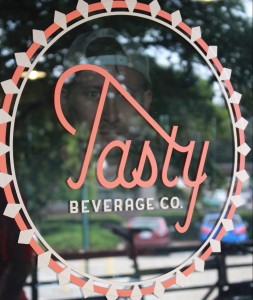 Actually, you know what – although this place just has to be tried, it was the first place we encountered any server attitude. And it sucked. We got over that once we were served a giant plate of fried chicken on a waffle, and filled our face with it. Weird but good. 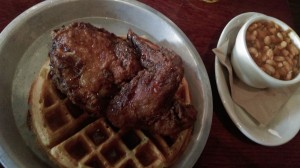 Waffles, muffins, Raleigh-roasted coffee and beer – what’s not to like? A mural made out of coffee beans and a bike on a wall. Cold brew coffee and several beers on tap – local and Belgian. Beer in a coffee shop; my kind of coffee shop. 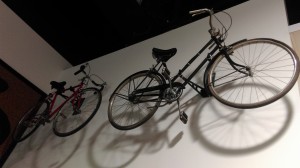 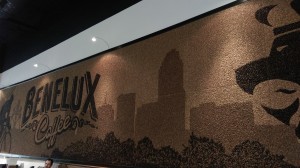 Technically not in Raleigh, but in neighbouring Durham, but we couldn’t let this escape without a mention.  Partly because of the legendary peanut-guy who had the crowd playing call and response game of “PEANUTS?” “THREE DOLLARS”. But mostly because of the bacon-topped doughnut. Yes, that. The baseball was a lot of fun too. 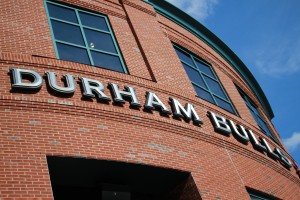 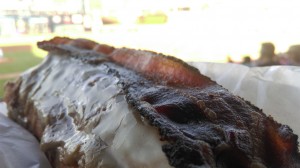 Somewhat of a finale to our trip (as if we hadn’t indulged enough) was the Downtown Raleigh Food Truck Rodeo. 50 trucks from across the state of NC join together across 11 blocks (1/2 a mile!) to treat the locals. What an event!  It’s a regular thing here, but like no food festival the UK has ever seen. I swear I saw a guy walking along with a turkey leg as big as a strongman bicep. Dial: EATBACON. 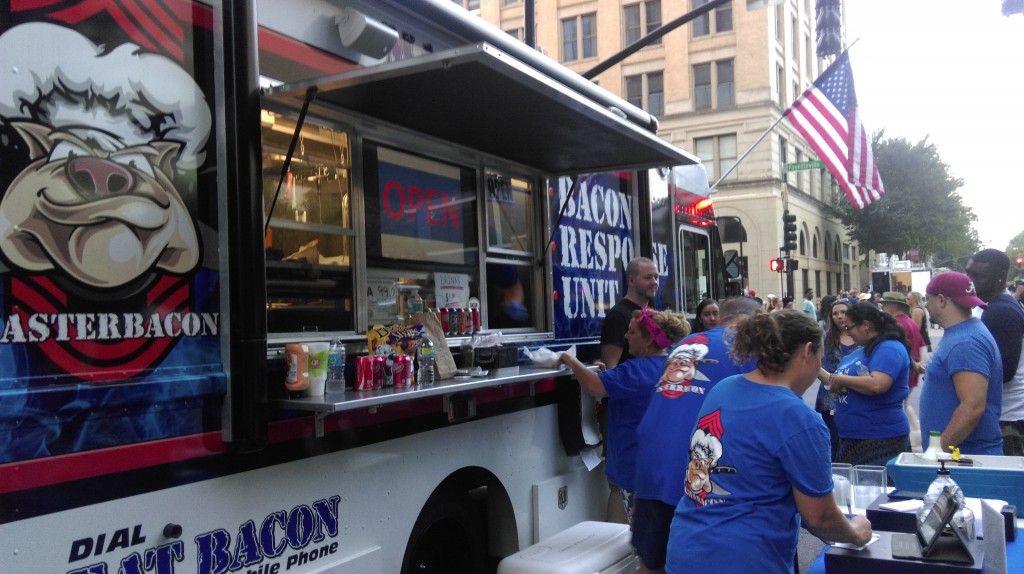 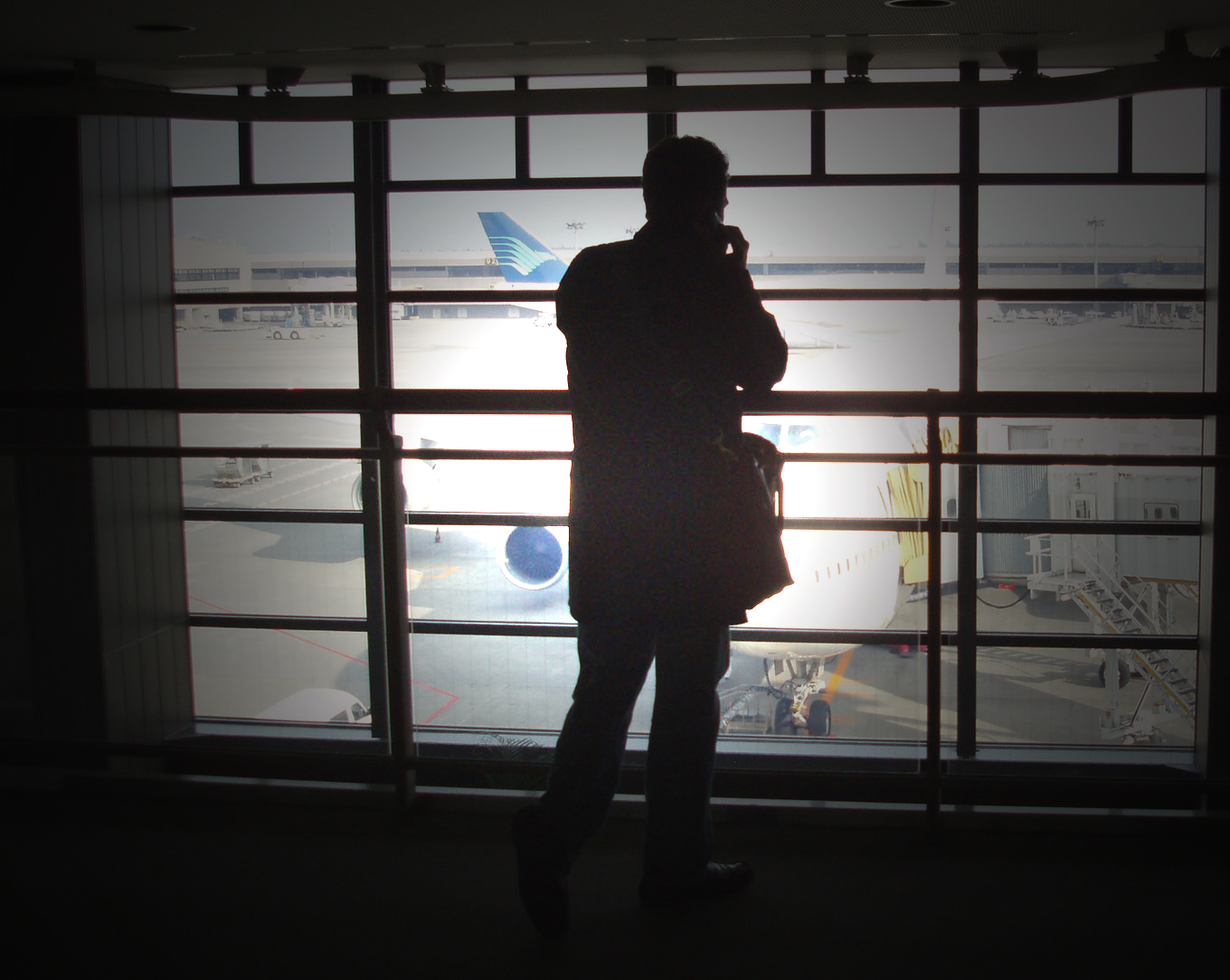 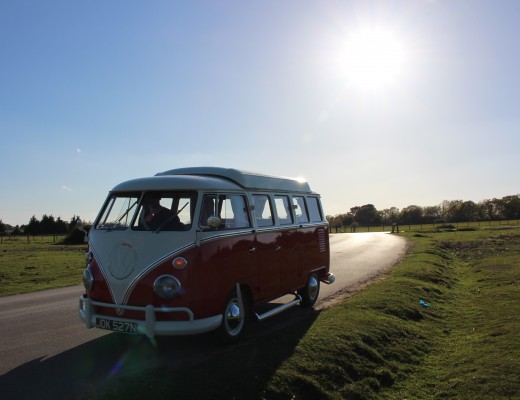 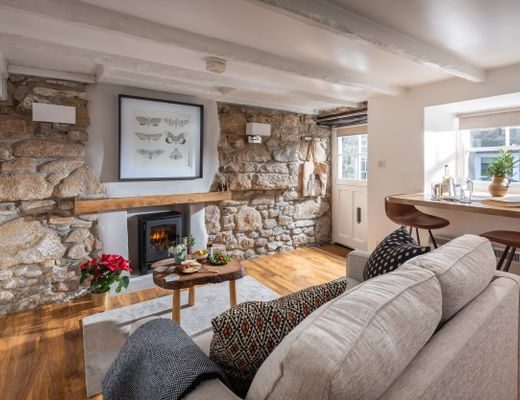